Data Cube provides developers with a solution for full-cycle audio/video quality monitoring, traceback and analysis. With the assistance of quality collection and analysis on all audio/video links, you can find problems and their causes for solving, thus improving the user experience.

It can solve audio freeze, video freeze, no sounds and no videos in audio/video fault scenarios, facilitating the location and analysis of out-of-sync audios and videos.

Visualization is to display full-link quality data of each call in a chart, and extremely improves the efficiency of solving in-call problems.

Call search is to search all channel call lists required on the basis of time range, channel ID or user ID.

Click Channel Overview of one call, to jump to the corresponding audio/video quality analysis module.

The call search only supports searching data of the last 15 days.

The duration in call search is only a reference value, but not the duration for billing.

Channel overview is to display call experiences of users on a publishing end and a viewing end in one channel call, such as whether audio/video freeze, audio/video traffic fluctuation, no sounds and no videos occur during the call, and helps you to know about the experience quality of this call quickly. This page displays basic information of channel calls, a user list and a call experience quality panel from top to bottom. 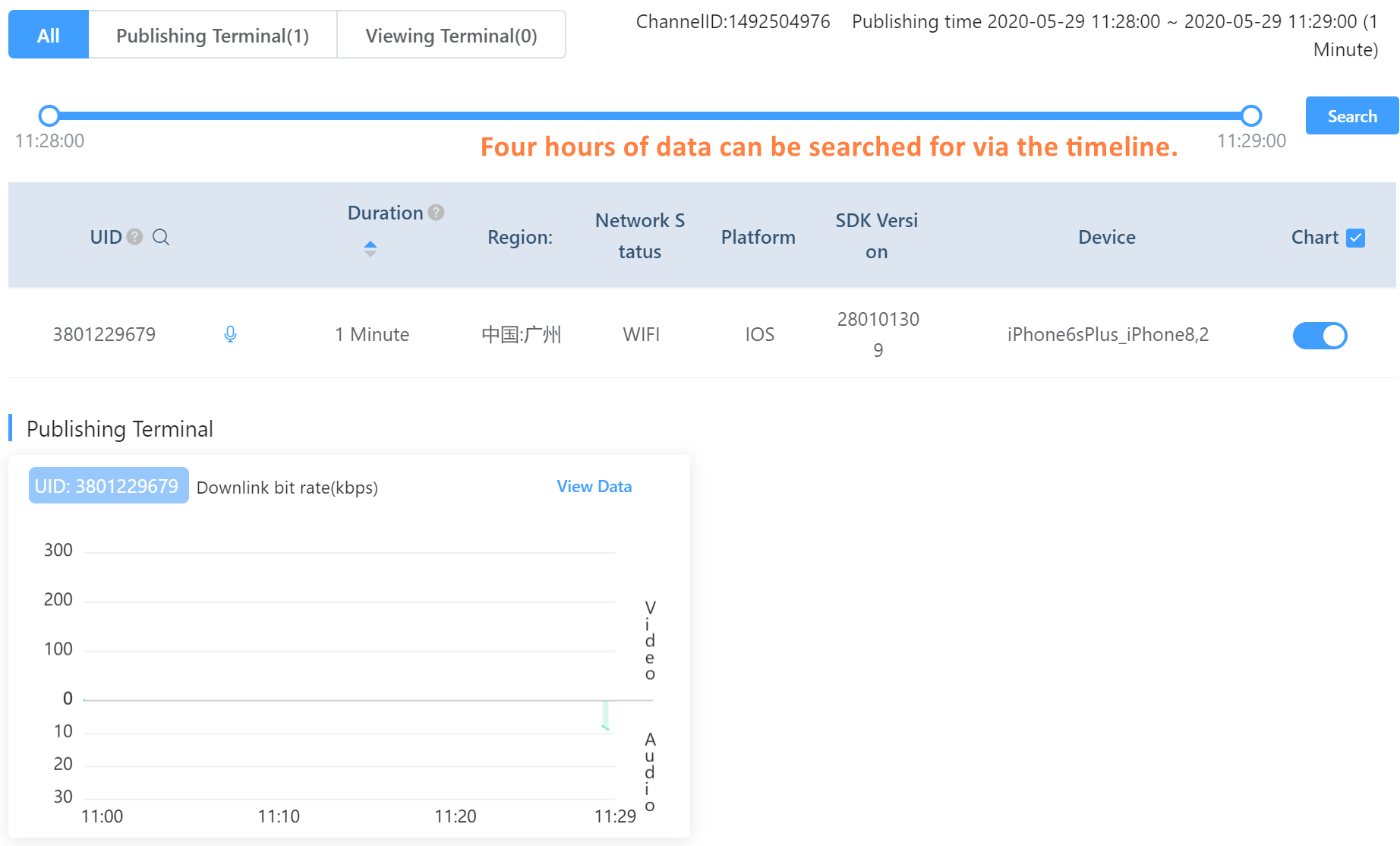 Basic information of calls displays your channel name, and start/end time and total duration of one call.

The button group is used to screen user’s publishing mode (a publishing end or a viewing end). The default is to check all buttons.

The duration allowed to search calls is 4 hours at maximum, and the last 4 hours are selected by default. When searching other points-of-time, you need to drag the time axis of calls for switching. 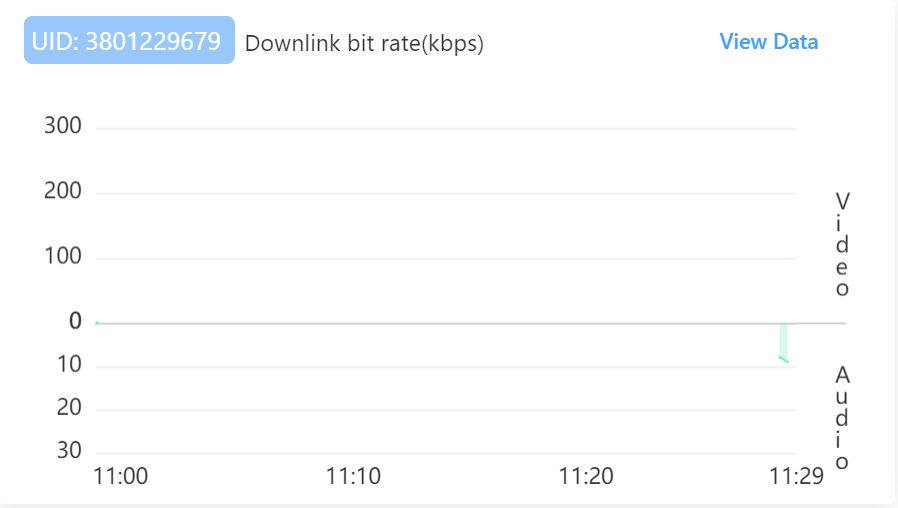 The call quality panel of publishing end displays the call experience quality of each audio/video publisher.

The upper part of panel displays basic information of a user, involving user ID, specification names and units in the chart, and an audience ID list correlated with this user. The audience ID list is allowed to screen. Click one audience ID to jump to the P2P troubleshooting interface of Data Cube.

The chart is used to determine whether user’s audio/video quality is stable on the basis of the trend chart of sending bit rates. Behavior events of some users are added to the chart and are displayed in a histogram.

The call quality panel of viewing end displays the call experience quality of each audio/video receiver.

If finding that the quality of call experience with one publishing end is bad, click View Publishing End at the right top corner of panel, and select this publishing user ID to go to the P2P Details page for analyzing specific problems of call quality.

The End-to-End Details page provides detailed audio and video quality indexes from a specific publishing end to a specific viewing end, which commonly determine the call experience of end users.

Quality summary is to analyze and summarize all quality data in the user period, and conclude seriously impacted audio/video quality, to provide summary of impact factors and cumulative duration of exceptions.

You can analyze audio/video indexes on the P2P Details page, to find out root causes of audio/video quality problems. Each index represents the specific meaning as below:

The bit rate refers to data bits transmitted in unit time during data transmission, and the data unit for panel display is kbps.

Packet loss refers to data packet loss during data transmission, and the data unit for panel display is %.

In general, slight packet loss has no impacts on audio/video call experiences. Higher packet loss rate (exceeding 5%) indicates that the network quality is relatively poor, and audio/video freeze, fuzzy video and other problems may be caused.

The frame rate refers to a rate at which bitmap images of a frame appear on the display continuously, and the data unit for panel display is fps.

Usually, the frame rate of audios is constant at 50 or 20 frames. Excessive fluctuation of the frame rate may cause instable sounds and freeze during answering.

The device captured volume refers to an audio value captured by the audio device of publishing end.

The volume represents a sound level of a publishing end user. The audience cannot hear sounds when the volume is too low.

Determine the video output and playing stability of the device in accordance with the device performance. Video freeze will be caused due to higher performance configurations of the device, and videos cannot be output or played.

The resolution refers to a pixel value (width x height) of an image.

The user behavior events are reflected on the time axis of a quality chart for channel calls. The events are displayed in histograms in green, yellow and red, in which green represents normal events, yellow represents general events and red represents serious events.

Was this page helpful?

Submitted! Your feedback would help us improve the website.